Following up on Legendary Duelists: Season 1, another box-with-a-blast-from-the-past is coming your way with Dragons of Legend: The Complete Series!

Dragons of Legend was home to some of the most popular and most influential cards ever released, and Dragons of Legend: The Complete Series is poised to make them look better than ever with colourful Ultra Rare technology! But colourful Ultra Rares aren’t the only way your favourite cards can look better than ever – Dark Magician Girl the Dragon Knight, Yugi’s most famous Timaeus Fusion from the “Waking the Dragons” storyline, will appear with brand-new art!

As an extra special bonus, each Dragons of Legend: The Complete Series box will have 1 of 3 collectible dice featuring one of the Legendary Dragons: Timaeus, Critias, or Hermos. 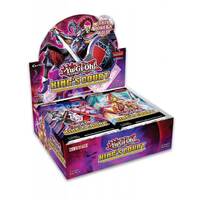